MCUSA youth from across the country found themselves ‘on the way’ to downtown Kansas City for #Mennocon15. Many groups flew from far off locations, while other groups piled on buses to travel to KC from cities like Denver, Columbus, and Philadelphia.

The BCMC Senior High, twelve students and five leaders, enjoyed a nice little jog to convention in a big red van and a couple Subaru’s! (Thanks Orvin and Janet!) 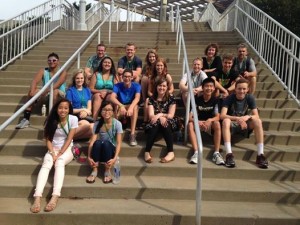 The first word that comes to mind for me, as I think about the convention experience, is stimulating. We start by gathering downtown in a large city, a context quite different from the familiar wider Newton community. Once unpacked, we find ourselves, suddenly, in a big convention center amidst crowds of people. Everywhere we turn, there is a seminar, a game, an admissions counselor, a group of friends, a college exhibit, a free t-shirt, a hymn sing, a folk concert, somebody with a video camera, a movie – the list goes on! Twice a day, we gather for worship in front of an expansive stage adorned for a full band. Two large screens and an array of flashing lights create a highly engaging and – oftentimes – overwhelming atmosphere. Worship services begin with creative advertisements and calls to engage convention through means of several social media platforms. From a youth and youth sponsor perspective, the convention is more ‘on the move’ and less ‘on the way’! 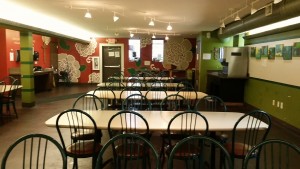 I am grateful for the fact that mid-way through the week, our group had the opportunity to break off from the convention spectacle and spend an afternoon serving at the Kansas City Community Kitchen alongside Rich, John, Kenny, and Juan the baker. The Kansas City Community Kitchen serves 2,500 hot lunches per week and 130,000 hot, nutritious meals per year in a neighborhood not too far removed from downtown. As youth sponsor Karen LeVan noted in her reflection on our service experience, Lead Chef Rich asked us to “be honest about whether you give what you hope to receive.” I believe our group was abundantly faithful to Rich’s request, even as it meant cutting down raw chicken. (A helping of Juan’s fresh cookies served as additional motivation!)

As the week progressed, it was clear that Senior High youth were encountering and processing the issues and atmosphere of the adult delegate sessions as they attended numerous seminars and other events. On Saturday morning Ben Kreider, a BCMC delegate, visited with us to talk about his delegate experience and the content of the resolutions. Ben shared about the tension and widespread emotions present in the delegate assembly, but he also noted the spirit-filled dialogue that he encountered at the table with fellow brothers and sisters representing many diverse communities.

At one of our many morning breakfast and debrief gatherings, each of us in the circle shared one of our favorite aspects of the convention experience. I was struck by the fact that almost everyone shared something different. While #Mennocon15 at times felt overstimulating, I am grateful that the large buffet of activities and experiences meant that there was something engaging for everyone.

I am also grateful for twelve students who jumped completely into the convention experience. I am grateful for Ben Lichti, David LeVan, Karen LeVan, and Allie Shoup, who devoted an entire week to enabling the students to learn and grow. Finally, I am profoundly grateful for a congregation that values and supports the lives of youth.