The following are on permanent display in the Bethel College Mennonite Church.  Click on any image to start a slide show. 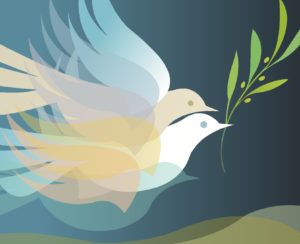 The dove and olive branch motif is rooted in the eighth chapter of Genesis.  The sign to Noah that the flood waters were subsiding was the return to the ark of a dove with an olive leaf in its beak.  This signified that peace was again restored between God and humanity.

In this visual interpretation of the dove’s return in the Genesis account an olive branch with numerous leaves is used, and multiples images of a dove could suggest a dove in motion, underscoring the urgency of the message for our time.

Within the Christian tradition the dove and olive branch have signified peace and reconciliation.  Mennonite Church USA has adopted that motif as its official symbol. 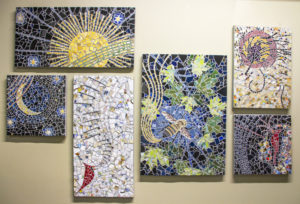 The hymn All Creatures of our God and King celebrates the visual beauty, music and force of nature.

The imagery from this hymn is the basis for these mosaics.

The cardinal and honey bee mosaics represent all creatures lifting their voices in song; the sun and moon mosaics illustrate the burning sun with golden beam, and thou silver moon with softer gleam; the tree mosaic shows the rushing wind that art so strong; and the mosaic with the human face visualizes sensory response to the beauty and sound of birds, and appreciation for mother earth, who day by day unfoldest blessings on our way. 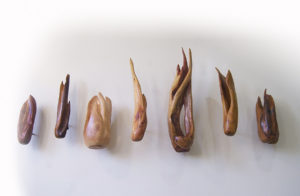 John Gaeddert – Many Gifts, One Spirit (Above south stairs to Fellowship Hall)

We are the Church Together 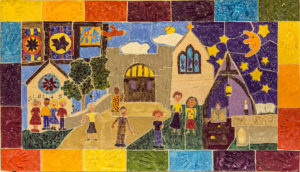 We are the Church Together (Fellowship Hall)

This clay mural was created by the 1997 Summer Sunday School students in grades K-8 to commemorate the 100th anniversary of the Bethel College Mennonite Church.  After studying the history, structure, and art of the Bethel College Church the students developed drawings which were used to compose the design.  Three hundred pounds of white earthenware clay were pounded into a wood frame and the design was transferred to the clay.  The students caved and pressed textures into the clay, then it was cut into pieces, dried, and fired.  After glaze was applied the tiles were fired again.  The tiles were then reassembled, glued into place and grouted.  LaDonna Unruh Voth and Kathy Schroeder directed the project.  Conrad Snider served as artistic and technical coordinator.  Many other BCMC members assisted with the project by teaching portions of the class, supervising work sessions, providing transportation, and leading devotions. 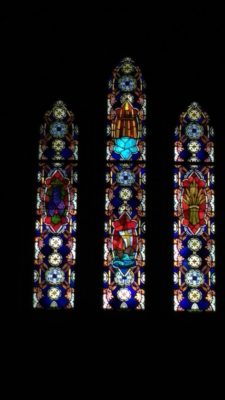 Why a ship in our stained-glass windows?  In the 1950s choosing the images for the west stained-glass lancet windows for the new church was quite an issue. Eventually four symbols were chosen, the “cross of Christ triumphant over the world,“  the grapes, the wheat, and, most dramatically, a ship in full sail.

From earliest times, Christians have viewed the ship as symbolically the ark or ship of the Lord.  When ordering the windows, the congregation called special attention to the scarlet cross on the sail and the stormy seas. These would “convey the central idea of the church charting her course on the seas of life.”  The result is very striking—a sermon in glass. The Jacoby Art Glass Company of St. Louis made the windows, the same company used by First Mennonite Church of Newton 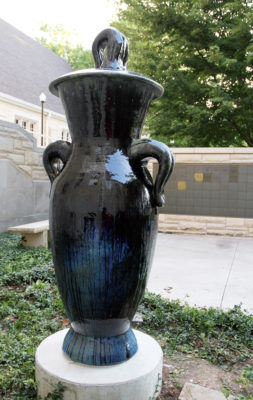 This jar is a metaphor for retaining and reflecting on memories, both our own memories, and the memory of those who came before us.  The strength of this piece is symbolic of our strength as a community; the drips in the glaze symbolize the steady passage of time; and the shine symbolizes self-reflection, connecting each person–who pauses to look–with the vessel and its meaning.